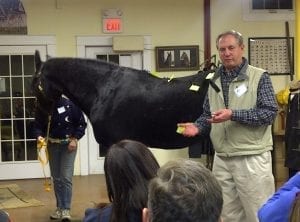 This picture showed up on my timeline today. It’s from 7 years ago when I had a retail store for all things carriage driving. Honestly, there are more things that I don’t miss about the retail store than I miss.

In concept, it was a great idea. Actually, the seeds of the store had started not too long after I had left the “hired gun” phase of my career and started down a path of self-employment. It was a matter of practicality.

When I started teaching lessons, I would often get to my student, and find they had either the wrong equipment or really marginal gear. I advise them to call so and so harness maker to order such and such replacement piece. Inevitably, there will be some miscommunication, and the wrong piece of harness would show up.

In the end, it usually ended up with me calling the harnesses maker or carriage builder to sort the whole thing out. So it became a matter of efficiency that I set up dealerships with most of the equipment providers that I knew.

At the time, there were only a few places that sold carriage driving equipment the way tack stores sell riding gear. Even at that, they didn’t carry any inventory to speak of. So it still was a matter of making phone calls, waiting for them to call their vendors, waiting for the vendors to respond, then make whatever it was that the customer wanted. It was a long drawn-out process.

That lead to me deciding to keep a few things on hand because I knew there’d always be a need for certain items. Besides, it seemed like a good way to fluff up my income a little. I was scraping a living together by teaching lessons, but it seemed nice to make a few extra dollars here and there. 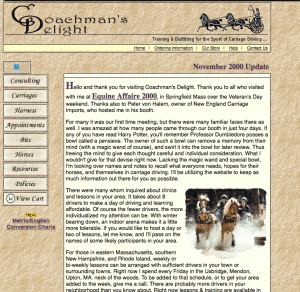 Since I had this little bit of inventory on hand, I thought, why not set up a website so people beyond my local students could buy some of that stuff? CoachmansDelight.com was born.

My focus at the time was still primarily training and instructing. The retail end of it was kind of a “one hand washing the other” type of model. After all, if the student didn’t have the right gear, it often interfered with us having lessons. Since I wanted to teach lessons, it was important to get the student up and running as quickly as possible.

On the other hand, if someone called me with a need for a piece of equipment, I could easily turn the conversation into “Do you know how to fit, adjust, and put to use this equipment? … Oh, well, I could come out and give you a few lessons if you’d like.” A perfect match!

The website reflected this philosophy. Just as the current website, there were articles and tips on training and driving equipment. Of course, the internet being what it is, I started getting contacts from further and further afield. My inventory grew to keep up with the modest needs of the website.

The bricks and mortar part of the business was once again, born from a standpoint of practicality. I needed more space for the growing inventory. Renting retail space, believe it or not, was pretty equally priced compared to renting just plain storage and office space. 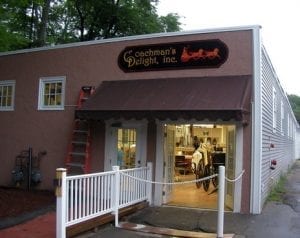 This eventually led to the store you see in the pictures. It was an absolutely beautiful space with over 2,000 square feet. Really, it was everything that I had dreamed. There was plenty of room for carriages, harness, and accessories (like hats, oh the hats!) It also made a great meeting space for classes and demonstrations.  I could even bring horses in there when we had discussions on harness fit, veterinary care, or anything else that having a real live horse on hand was useful. Of course, you know what they say: “Be careful what you wish for…” 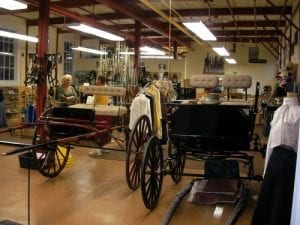 Running a full-scale retail operation is much different than being a horse trainer. It takes an intense level of management (not one of my strong points.) For a few years, I had a great manager (who, also, by the way, had no intention of being in the retail trade.) When she grew tired of that, I was never able to find someone who matched her skill.

I had to be much more hands-on in the operation every single day. Added to that, the market was changing. In fact, retail as a business was changing. Gone were the days of buying something for $1 and selling it for $3. Actually, those markups never existed in my trade. It was more like, buy for $1, and sell for $1.20, or in a great scenario, $1.50. 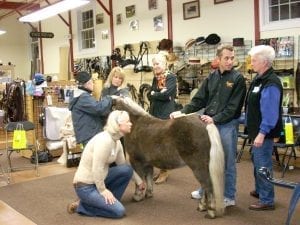 Sparky enjoying the attention he got when he was in the store.

Lots of other people thought that a harness shop was a great idea. It seemed that one person after another wanted to have a similar business. The worst part of that was, for many, it was their retirement business. They actually needed their business to lose money for tax write-offs. They could afford to sell things for far less than I could.

The kicker was when a retailer entered the trade using a Walmart business model. Sell lots of stuff impossibly cheap to eliminate the competition. Once the competition was gone, you can sell the gear for whatever price you choose, because there will be no one else to buy from. It worked.

The bigger problem for me was that I was now a retailer, more than I was a horse trainer. I got into horses and teaching because that was what I love. Sure, I liked helping people get better equipment than most were selling, but boy that was a tough row to hoe. Ugh, my stress level rises just thinking about it!

I do miss a few things though. It was great to head out to a clinic with a “bag of tricks” filled with bits and accessories that I knew people would need. I miss those times when I had the full retail booth set up at a location where I was teaching, so I could just sweep in, grab what a student needed, and sweep out (as you can imagine, that drove my employees nuts!)

And, of course, I do miss that beautiful space. It would be so cool to combine my online classes with a “live studio audience.” Think of the possibilities!

Back to What I Love 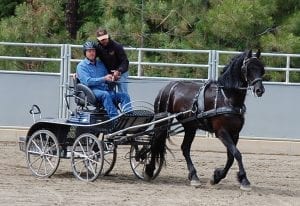 Teaching from the running boards in Washington

Nowadays, it’s much more fun though. I get to spend much more time with students and their horses. I get very energized when I’m teaching. I often find myself with more energy at the end of a day of lessons than I had at the start of a day (that’s not permission for you organizers to schedule 9 or 10 lessons in a day!) I love seeing “the light dawn on Marblehead” as people really begin to understand.

Sure, I still spend way more time at the computer than I ever imagined I would as a horse trainer. I know more about coding, editing and web services than the average person. But it’s all toward a singular goal. Helping people become better carriage drivers through better teaching.

2018 promises to be a busy year of traveling to meet more new students, and revisit the ones that I’ve met in years past. The great thing is, I don’t have to think about inventory, mark-ups, and all of those things that went along with selling products. I get to focus on what I like to do the most, and what I do the best.

I’m really looking forward to the upcoming season.  I have several clinics scheduled already with more to be added soon.  You can see what’s scheduled on my Upcoming Clinics page. If you’re thinking about hosting me in 2018, this is the time to get yourself added to the calendar.  Available dates will fill up quick!