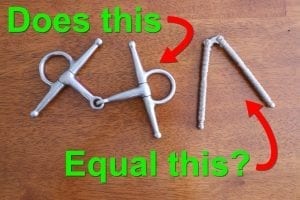 When talking about bits for carriage driving horses, there’s a dizzying array of bits to choose from. There are Liverpools, Buxtons, Butterflies, Elbow and beyond, and that’s just talking about the cheek pieces. The mouthpiece that resides between the cheeks is a whole other factor.

Mouth pieces come in an equally wide variety. There are arch mouth, Mullen mouth, French link, and even more options than cheek pieces. For the purposes of this article, let’s focus on one specific mouthpiece. The single jointed bit.

This mouthpiece is often mislabeled as a “snaffle.” A “snaffle” bit is one that does not have leverage. It is the antonym to a “curb” bit, which does have a purchase, and creates leverage.

We’ll go down the curb -vs- snaffle conversation in more depth another time. For now, let’s focus on the single jointed mouthpiece.

If you post a picture anywhere in the public sphere of a bit with a single jointed mouthpiece, you will instantly gather comments about how horrible such a bit is. Commenters will carry on about how the bit is a “nutcracker”, and how they would never in a million years use a similar bit on their precious horse.

That leads to the question:

If that is as ghastly of a device as people say it is, why has that the bit been used by so many generations of equestrians?

First off, let me just point out, if you’re cracking nuts with this bit, you’re clearly using it on the wrong end of the horse!

Secondly, the impression one gets from that description is that the bit will crush the lower jaw of the horse’s mouth. There’s a small problem with that assertion: Mechanics.

For a nutcracker to crack a nut, the jaws of the cracker have to close around the nut. Next, inward force has to be applied until the nut is cracked. The inward force is the thing we want to pay attention to because that’s harder to create on a single jointed bit that you might imagine.

In order for there to be an inward force, the sides of the bit have to be compressed… well, inward. But that’s not where the rein is being drawn from. They are instead being drawn back.

The angle at which the reins are drawing upon the bit is limited by where the bit is being drawn from, either the terrets of the harness, or the rider’s hand. In either case, the angle of draft on the bit is forced to remain open by the width of the horse’s neck. That means that the “nutcracker” in question can only be closed to an angle that is as wide as the horse’s neck.

That doesn’t mean that there is zero inward force placed on the bit. As the bit is drawn upon, the barrel (aka canons) of the bit pivot in the mouth. That does create a squeezing effect, but it’s not a vivid as some would have you think. 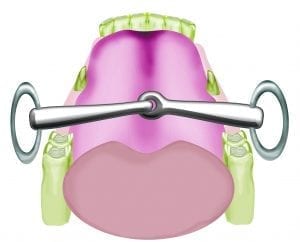 In addition to the squeezing, the joint of the bit can be pushed upward into the roof of the horse’s mouth. That is more likely to happen if the bit is too wide for the horse. Even with a correctly fitted bit, some horses will object, and others won’t be bothered at all.

The reason some horses experience palate pressure from a single jointed bit, while others do not is a matter of the conformation of each individual horse’s mouth. 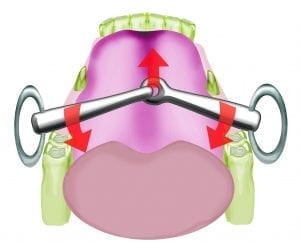 In a study commissioned by bit manufacturer Herm Sprenger, at The University of Hanover, in Germany, researchers x-rayed horse’s heads with bits in their mouths. Among the many measurements they took, was the distance between the upper jaw, and the lower jaw.

What they found was that there were significant differences from one horse to the next. Interestingly, there was no correlation between the size of that cavity and the age, length of the horse’s head, or even the size of the horse. Even more intriguing is that there could be a significant difference between the right side and the left side of mouth on one horse!

The point of this whole trip down Oral Anatomy Lane is that no two horse’s mouths are the same. With that in mind the same bit can act very differently upon different horses. 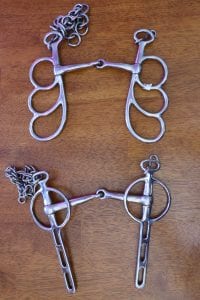 The answer to “Can you use a single jointed bit for carriage?”… Maybe.

It’s been my experience that you can’t always predict which bit a horse will like. Time and again I’ve hung a bit on a horse’s bridle, and said to the owner “There’s no reason that this bit should work.” We go out and work the horse, and he loves the bit!

It might leave me scratching my head, but then, who am I to question what works? If it works, it works.

If I’m making a big change in style of bit on a horse, I’m not anxious to physically connect myself to that horse in any meaningful way. When in doubt, I start by ground driving the horse in the new bit. If he’s going to throw a temper tantrum over the bit, I’d rather he do it in his space, while I watch from my space.

If everything goes well there, I’ll continue on to experimenting with the bit from the carriage or the saddle in a safe environment. That usually means an enclosed arena, or at least in a place where the horse is comfortable working. Most importantly, I try not to do the experiment when there are other horses and drivers or riders around. No need to get them involved in our experiments!

What Should You Do?

If your horse seems to habitually throw his head, or tuck his chin inward, he’s probably not a big fan of the bit you’re using, whatever that bit may be. Don’t be afraid to try a two-piece bit. It may work just fine, or your horse may object to it. The fact of the matter is, you won’t know until you try.

If your horse is going well with a two-piece bit, don’t worry about it. You’re not doing anything horrible to your horse if he’s comfortable with the bit.

What bit is working for your horse?

How do you introduce a horse to their first bit ? what is the best bit to start with ?

Often I’ll start with a relatively thick mullen mouth or double jointed d-ring bit. I’ll hang the bit off of an old bridle, and have horse wear the bit for a few hours a day while not working, just to get used to the idea of a bit. You have to hang the bit a little low in the mouth for that, so his cheeks don’t get agitated.
When it comes to working, I’ll start with the reins tied to both the halter and the bit at the same time. That helps the horse understand that he should follow the bit the way he follows the halter. This is done while ground driving and long lining.
Eventually, we graduate to just using the bit.
This is a very short, answer, for a very long process! Hopefully you get the idea though!

I bought a Bowman Bean Link… LZ loves it… finally something that works for her!!!

Palate, not pallet which is a shopping structure. Otherwise, good article with nice reference for research

Thank you! I do most of my own proofreading, and sometimes those little things get by.

Our mare loves the glory bit we shaved a mill from it as we did think itwas a little to thick. Have been trying to get another with out success.

It would be worth giving Bowman Bits in Millersburg, OH a call. 330-893-1954
They make bits to order, including something very similar to a Glory bit.