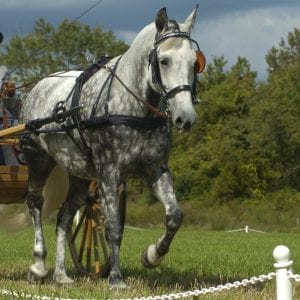 Do you ever feel like the second half of your dressage test or pleasure class is just a little better than the first half?  Maybe you’ve even thought, “If I only had a little more time to put my pony together, I could have had a much better drive.”

That’s a common experience.  Sometimes it seems that just as you’re getting into the groove, it’s over.  You feel like there was so much more that you could have shown the judge if you were given another minute or two in the ring.  Not that anyone is anxious to add more movements or time to dressage test, but you’d like to show your pony doing his best movement. If only the judge could see how well your horse was going in the warmup, or at home!

One of the big differences between working at home and driving in front of a judge is time.  When you’re in a dressage test or pleasure ring your horse is expected to show his best movement at the moment it’s asked for.  At home, you have the luxury of time and space to build each movement a little bit at a time.  Maybe the trot starts out with a little too much energy so the rhythm isn’t well established.  No problem, you give a few half halts, take another circle, and that nice steady trot comes together.

The trouble is, at a show, you can’t just say “Hold on, this trot isn’t very good.”  By the time you’ve gotten that trot together, it’s time to change direction and move on to the next figure. Of course, if your attention is on improving your horse’s movement, the next figure can sneak up on you pretty quickly.  Suddenly you feel as if you’re driving from the back seat, reacting to the test that you’re driving, rather than going out there and owning it.

If it takes 10 to 20 seconds for your horse’s trot to really come together, it’s probably because the horse wasn’t properly prepared to move into the trot.  The result is that you end up spending that time trying to improve upon the trot, instead of focusing on the next movement.

It’s Not the Gaits, It’s What Lies Between the Gaits 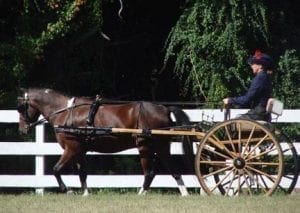 Improving your horse’s transitions takes an understanding of all the elements of a transition.  While the best transitions appear to happen all at once, they’re actually multiphase events.  A successful transition is created from good preparation, execution, and followthrough.

Focus on the First and Last Step

The big mistake that most people make when approaching a transition is focusing too much energy on the execution phase.  This often leads to drivers pulling and holding the reins through downward transitions, or throwing the reins away in an upward transition.

As with any worthwhile project, the more you focus on the preparation, the better the outcome will be. In transitions, this means providing balancing half halts combined with driving aids to establish the rhythm and engagement necessary for a good transition.

When the preparation for a transition goes well, the execution phase almost becomes happenstance.  You’ve properly set the stage for the horse to make the change in gait, and it’s now more a matter of “why wouldn’t he transition at that moment?”

The last phase of the transition is nearly as important as the preparation, and it tends to be the one that people have the most trouble implementing.  Just like a good baseball pitcher understands that the followthrough has as much to do with how the ball moves after it’s left his hand, your follow-through in a transition completes the transition into the new gait.  The tricky thing is, the followthrough starts before the execution phase is complete.

All too often riders and drivers continue to ask for the transition as the horse is in the act making it happen.  This interrupts the horse’s rhythm, relaxation, and ultimately the connection to the driver.  This is the main reason why so many people have to spend time putting the new gait together after the transition. 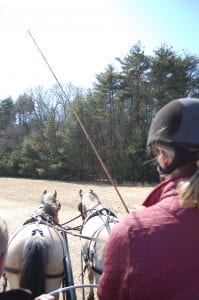 As with any skill, it takes practice and repetition to hone the skills for making great transitions.  Rather than going out and sustaining a trot for 20 minutes at a time, you have to approach your work on transitions with that as the main focus of your workout.

The lesson plan gives specific waypoints for your transitions to improve your timing with each cycle of the exercise. With each repetition, you can focus on your preparation and followthrough in your transitions.