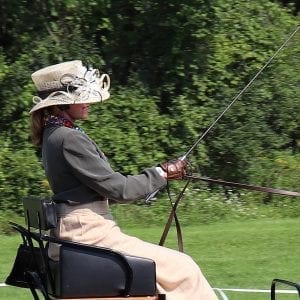 Probably two-thirds of the information passed between the driver and the horse is transmitted through the reins. It stands to reason that the more clearly and accurately we can handle the reins, the clearer and more accurate our communication will be.  That’s where being able to achieve stillness on the reins is critical.

Of course, how often are people ever really completely still in their hands while driving a horse? After all, there’s a whole lot of driving going on when you’re navigating a horse through the world. The reins are being used to communicate the direction of travel and speed, but also how we want to horse to move in his body while he’s going. In between all of those major considerations, there are all of the little refinements we ask for.  “A little more forward here, more engagement, slightly wider through the turn there” and so on.

Then we have to consider all of the involuntary movements in our hands. Those are the communications we don’t even realize our bodies are sending through the reins. This comes in the form of resistance when the horse is doing something we don’t like, or relaxation when he’s moving in a pleasing way.  All of these factors pile one on top of another to create the result of the reins being in constant motion.

That constant motion causes rein commands and refinements to overlap one another with little distinction between communication, observation, and refinement.  The communications get lost in sort of run-on sentence with little meaning. If we were to translate what’s going on with most drivers hands into text it might look like: halfhaltturnrightnotthatmuchrightthat’sbetteralittlemorebendslowtogetreadyforadownwardtransitionbutdontslowdowntoomuchohshitwhyareyouturningleftstopthatgostraightthatsbetterstopbeforeyouhitthejudgeokaygoodboy.

The fact of the matter is, without spaces and punctuation, the text becomes nearly unreadable. Sure, with a little practice we could all condition our minds to process the text written as above. Of course, much of the meaning and nuance would be lost when reading the text that way.

When your hands are in constant motion on the reins, that in essence, is what you are asking your horse to do.  He has to pluck out recognizable communications and directions from a string of text that would otherwise be unreadable.

How To Find Stillness

Creating stillness on the reins is more than just a pause in communication.  It takes a clearly focused effort to hold the reins steady without any activations. It takes the same type of prior planning and foresight that’s required to make a transition or change in direction. 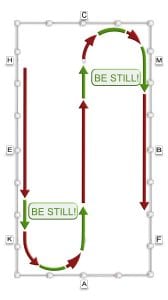 The best way to practice this is to set up an exercise where you know you’ll have an opportunity to be still on the reins.  That means choosing an exercise that you can rely upon your horse to give you the right response to a communication.  Since you know he’s going to give you that correct response, you’ll have the opportunity to be still in the moment before and after the communication.

To put this all into a more real-world example, let’s think about the simple exercise of driving the centerline of the arena, changing directions after each centerline. You can do this exercise both at the walk ans the trot.

As you drive along the rail on the long side of the arena, you’d typically half halt as you approach the corner of the arena, then initiate the turn.  To let your horse know you want more than a 90º turn through the corner, you’ll likely half halt again, and give a little stronger activation of the inside rein to put him on a path that will take you up the centerline. 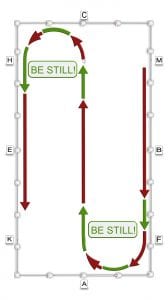 That’s a series of communications we’ve all done hundreds of times over while practicing driving the centerline of the arena.  The only thing that you are going to different is to look for your opportunities to be still on the reins.  There are three distinct opportunities for stillness in this exercise.

The first and last opportunities for stillness are the easiest ones to achieve, so that’s where you should put your attention first.  As you drive down the rail on the long side of the arena, pay close attention to your hands and how many rein communications your are giving. Well before the corner, take a deep breath and hold your hands still for 2 full counts (one-Mississippi, two-Mississippi).  Then half halt and ask for the turn through the corner and onto the centerline as usual. 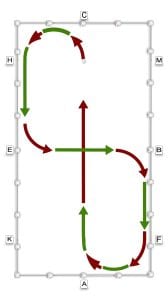 Repeat the exercise until you can really feel yourself successfully providing stillness on the reins before and after each communication.  As you drive, you’ll probably notice that it takes less and less to communicate with your horse to turn onto the centerline.  You’ll also notice that the space in between your communications seems to expand as if somehow there is more time to consider your next move. When that happens you can experiment with providing a moment of stillness through the apex of the turn onto the centerline.

Things might even start to fall together so smoothly that it feels like your horse is going on auto-pilot.  Sure, your horse will be quick to learn a routine, but don’t underestimate how much cleaning up your communication has helped.  To test how much of your success is the horse, and how much is your improved communication, take the exercise up a notch.

Instead of simple centerlines, you can ad in a change of direction across the middle of the arena. After returning to the long side of the arena from a centerline, make a change of direction from B to E (or E to B), then continue with the centerline exercise. This will give you two more opportunities to practice being still before and after a turn.  These turns will come in close succession, so you’ll have to be more alert and ready to create stillness in your rein handling. 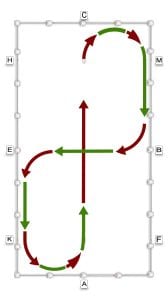 As you get better at this skill, you’ll be able to quickly employ it when and where you need it. Your horse will also begin to recognize that stillness as the prelude to a communication. You can use this to skill to prepare for transitions between gaits or within a gait.  You can even use it in those moments when your horse is going just exactly how you want (because, you don’t want to screw that up, do you??

Being still has as much value as just about every other rein handling coordination I could possibly teach you. In way, it’s the embodiment of saying more by saying less. So why not go out and give it try?

I just found your website- your articles are definitely clearing up a lot of questions I have…. no driving instruction less than 4 hours away from my place! My ridden dressage instructor called your term stillness, “being in neutral” and I need to apply it to my driving, thank you so much for the light bulb moment !

Thanks for sharing Pam.
Yes, it is similar to being neutral. In fact, I use that term occasionally, though I find people tend to conflate “neutral” with “passive.”
“Stillness”, on the other hand, is a premeditated act on the driver’s part, therefore, it’s active. You have to put your mind to being still, rather than just following along for a moment.
For example, in the exercise here, if we were also working on getting the horse to maintain better straightness, we’d activate our stillness with a bit more contact on the centerline (because straightness isn’t the absence of left or right, it’s *the equal application of left and right*.
Of course, now I’m vering off into talking about getting straight.
I guess I should be still, and let you find that lesson plan another time! (though it is an excellent lesson plan to practice this skill on.
Thanks again for the good vibes.
I’m glad I could turn that light bulb on for you!
~Andy

Great article and plan ,thank you.

Great coaching here.
It takes a great effort for some people to ‘stop talking’ . It requires good concentration to stay focused on the horse without having to communicate with the reins.
This will be a good exercise to practice. Thank you Andy for the tip.

Fabulous!!! I love your exercises and patterns.

Fabulous!!! I love your exercises and patterns.