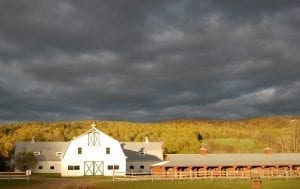 Every spring for the past, well I don’t know how many years, I’ve traveled to Green Mountain Horse Association (GMHA) for their Combined Test and Arena Driving Trial.  For me and my students, it’s a perfect way to start the season.

GMHA is a relatively small horse park in comparison to other horse parks that have developed over the past few decades around the country.  That said, it packs a whole lot of good stuff into just 65 acres.  They have 4 rings with really great, all-weather footing.  Nicely built and maintained permanent stabling for nearly 200 horses, and views that really can’t be beaten.

The weekend event is a combination of two competitions.  The first day was a combined test, in other words, just dressage and cones.  That’s a great, low-stress way to have a one-day competition.  Competitors get to focus on just those two phases of competition, and organizers have a little less work than a full scale three phase event. 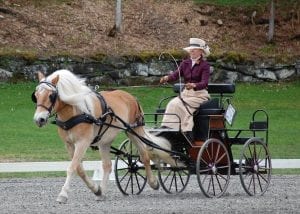 The second day was an Arena Driving Trial (ADT.)  ADT’s were conceived for using an indoor ring, usually during the off-season.  The idea is to give people a chance to work a little bit with all three phases of combined driving, in a quick one-day event.  Usually, ADT dressage tests are formatted for a smaller arena, cones are paired down to about a dozen or so, and hazards are lightweight, portable hazards.

However, when you’re holding an ADT at a place like GMHA, you get to spread things out a bit.  They have a full-size dressage arena plus two more show rings available to hold the various phases.  That allowed them to use the standard dressage tests for combined driving, set up a full 20 gates for cones in another ring, and put up hazards in a third ring.  It was more like a “Multi-arena Driving Trial.”

I had 4 students driving in both competitions.  Two of my students are more experienced drivers looking to move to intermediate sometime this year, while the other two are newer to the sport. They were all in the preliminary single pony division, though one gave the combined test a go at the intermediate level.

The results were overall good, to very good, with a few difficult moments to keep things interesting.  Everyone showed significant improvement over their drives at the same event last year.  That’s the big thing that I look for when I go to an event. 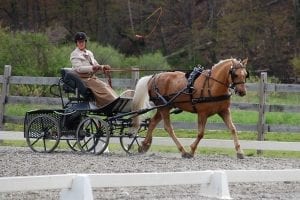 The high points of Saturday’s drives were a couple of 2nds and a 3rd place finishes in dressage and a couple of double-clear rounds in cones.  Those tests also gave us material to work on for the second competition of the weekend, the ADT.  Of course, we all saw room for improvement.

For example, when you no longer have to work on accuracy in dressage, but have to work on engagement instead, your performance in cones and hazards improve along with the accuracy.  And your work on engagement also pays off in the other areas of the competition in form of better, more responsive speed changes.  You see?  “Improving the quality of your problems” really is a good thing! 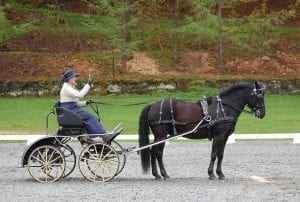 Sunday’s competition took place in steady light rain throughout the entire day.  The cool temperatures got the ponies a little more zoom in their step, which the soaked footing tried it’s best to suck out of them.  We shortened warm-ups to be sure the ponies didn’t run out of tokens before the rides were over.

That worked well for the more experienced drivers in dressage who tied for first place.  The other ponies must have lost their connection in the mud, so they didn’t fair as well.  Such is life!

We could all live with that because, in the afternoon, we all got to go out and splash around in the mud!  There were no problems when it came to laying hazard times down for my team.  They swept 1st through 4th place in that phase of the competition.  I guess the hazard training at the Spring Tuneup Camp really paid off! 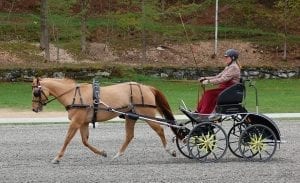 I had a blast because I got to navigate for three out of the four ponies.  I was pretty well covered in mud by the time I got back to the stables.  I can honestly say, at that point it didn’t bother me a bit.  Regardless of the weather, finishing a day with a quick round of hazards sure puts everyone in a pretty good mood!