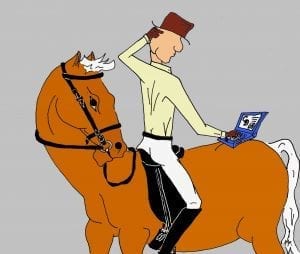 The most difficult thing about creating lesson plans is making sure that I explain the movements of the exercises as clearly as possible.  To be honest, that can even be challenging when we’re together in a one-on-one lesson in person! At least in that scenario, I can use as many words as it takes, point, and if all else fails, just go ahead and drive the figure for you.

When I’m writing a lesson plan for you to follow on your own, I’m always trying to find ways to make it easier for you to understand. That’s why I so often use the waypoints of a dressage arena to describe the figures in exercises.

I’m not expecting anyone to memorize the letters of the arena. Honestly I’m not very good at that myself! I often have to look at the letters when I’m giving instruction to be sure I’m sending my student off in the right direction. The letters of the dressage ring just make it much easier to explain where I want you to go.

The Places in Between 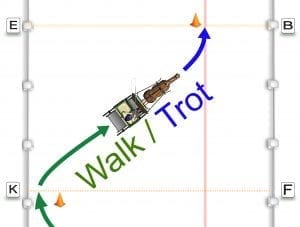 What should I name the place by the cone?

Unfortunately, those letters only get us so far. There are times when I want you to use a place in the arena that doesn’t have a letter associated with it. Still, I have to find a way to describe that location in as concisely as possible so you can make use of that instruction.  I usually come up with my own little shorthand, but I never really know if people are able to make sense of it when they print their lesson plans out and bring them to the barn.  So I thought I’d just ask you what makes the most sense.

I’m working on a new lesson plan that uses a waypoint that lies at the intersection of the quarter-line, and the line between B & E. Take a look at the picture to help you put that waypoint in your mind.

There’s no letter there, so I came up with a few possible abbreviations. Vote for the one that you like best, and that’s what I’ll use on the next lesson plan.

Since I know you’re going to ask after reading this, question in advance: I don’t. 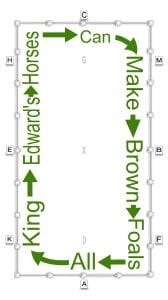 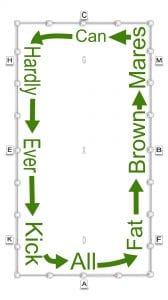 The obvious question was, “How do you remember where the dressage letters are?”

I’ve never been able to memorize those letters!  When I have to put out letters in a dressage ring, it’s a struggle. I usually start with what I know, which is that the diagonals are K-X-M (toward C), and H-X-F (away from C.) I’ve always had C in my mind, since that’s pretty much the first focal point when entering the arena. For some reason I’ve always just known that M is to the right of C if I’m headed up the centerline.  So that gets the corners, and the centerline sorted.  When it comes to B and E, I’m pretty useless.

The centerline letters were a challenge for me, until one day a dressage lesson took an… unexpected turn. I was teaching at an equine exposition (think, family event!) The lesson had to do with preparing for transitions. As my student was barreling up the centerline, it was clear she was going to blow right past the spot I had placed for her to halt her pony on between M and H. I started carrying on, in my usual, silly, animated way, about how she needed to prepare to hit her G-spot. I think I referred to that about 6 or 10 more times in that lesson before I could actually hear what I was saying. I’m not sure if I ever got invited back to that venue, but now I always remember where G and D are on the centerline!

So how do I get around a dressage test?

For me a dressage test is a series of shapes and sizes, rather than letters. Reading the text of the test I first look to see which way the test “tracks” in the column labeled “test.”  That gets me going around the ring in the correct direction in my mind.

Then I focus on the gaits and figures. I read the directions in the test for the gait, then the description under “Directive Ideas.” That gives me a feel for the flow of the test, and what the important points are that the test will be judged upon. I know that the ring is 40 meters wide, so a figure that’s 20 meters is half the width of the ring (10m = 1/4, 30m = 3/4.)  From that, I build the map in my mind, then use the map provided with the dressage test to confirm what I just imagined.

Well, this has been a fun little trip of over-sharing.  I hope it was good for you!

It all started with wondering which way to write a lesson plan for you, but got a little out of control after that.  I guess this is what happens when the sun hides for too long and we can’t drive our ponies as much as we want. Feel free to over share your stories about how you remember your dressage tests in the comments below. While you’ve got some time on your hands, check out what’s available for classes, or read some more blog posts just for fun.

I had an awfully hard time memorizing them too, when I started. At lower levels, you only need to know the basics: AKEHCMBFX. (All King Edward’s Horses Can Make Big Fences [e]Xceptionally.)

At the higher levels, you need to know them all. The letters around the edge are: AKVESHCMRBPF (All King Victor’s Expensive Show Horses Can Make Regal Barristers Place Fantastically.) And centre line: DLXIG (Dagmar Loves [e]Xperiencing Irish Galway).
I found this on Yahoo, my instructor had a different one years ago, but now after so many years of dressage, it has become more automatic.

Maybe for your example, K to qB, or K to 1/4B, might make sense, as the quarter line is prior to B. I’m visual, so would prefer to see the map, then read. As they say, “a picture is worth a thousand words”….

I think that using abbreviations in lessons can confuse and frustrate new dressage students! I have ridden dressage through FEI and am now driving but your abbreviations were hard for me to “comprehend “! However, I am now an old fart so could be I’m easily confused! When I taught dressage, I used the simple names of movements, court placements and letters and 1/4 lines, etc. Until the student understood the Language! It is after all, a Language!

Very true for teaching in person. There, we have the ability to be as clear as we have to be, and if needed, change how we are teaching to suit the student’s learning style.
In written lesson plans, it’s a little less flexible.
In written lesson plans, each exercise includes a full page (sometimes more) of coaching, where abbreviations aren’t necessary. I can describe the figures, and the points in the arena quite clearly, plus add diagrams to help make things clear.
After the full explanation of the exercise, I like to provide a single page with the directions written in short form for easy reference when someone is driving or riding the lesson plan. That’s where abbreviations are necessary. Writing out, “Drive from the corner, diagonally to the quarterline at the center of the arena” 5 times in an exercise would make the exercises too long to fit on a single page when combined with diagrams. Thus, “K – B 1/4L”

The quarter line is 5 meters from the rail. I’d use K to 5 meters inside of B then trot.

Fun to help out

I just memorize the pattern and think about the symetry. I use the letters as destination points not really for what letter it is. Kind of like memorizing cones corses. Nice they have numbers but you better know where you are going and not have to rely on reading the numbers. Going to fast to start looking for the next number.

I was hoping that the poll would show the entries that people have typed in for their personal system to remember the letters. Until I ca figure that out, I’ll share some the responses here.

Here’s one that made me laugh out loud:
Braille (1 vote)

Here are some other good submissions:
A First Place Blue Ribbon Makes Common Horsemen Strive Even Keener (1 vote… extra credit for including RSP in there, but I think Very is missing for V, or maybe “even” is “E-V-en” )
Visualize (1 vote)
A Fine Black Morgan Can Hit Every Kone(1 vote)
Drive the letters alphabetically with cones. Timed . A-z and then z- a (1 vote… wait a minute, where is Z??)
I pair up reminders like Kentucky Fried for cones across from each other. (1 vote)
All Kids Eat Honey, Children Must Be Fed (1 vote)
All Kids Ever Have Candy Made By Friends (1 vote)

Perhaps the most insightful answer yet:
Haven’t had to, they’re always posted in the arena I drive in. (1 vote)

Another tip I got for memorizing tests is that they are usually a mirror. So, if you get lost, just think about what you have done and flip it. Thanks to my dressage instructor turned driver 🙂

I was taught decades ago that the line from B-X-E was the “short center line”.
This exercise would be described as “K, walk to short center at 1/4 B, trot”