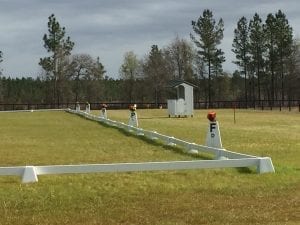 I’ve been on “official business” in South Carolina for the past four days, at the Windsor Trace CDE and Combined Test. Well, it was semi-official business. As a combined driving judge, I have to attend a judges’ clinic at least every three years to maintain my judging license with the ADS. So I got to be a clinic attendee for a change!

The clinic serves to refresh and brush up on our skills as judges or technical delegates and bring new officials along into the sport. There are quite a few advantages to having a clinic at an actual live event, rather than as a closed clinic just about the judges. We are able to be flies on the wall for all aspects of an event from organizing, to scoring, and of course, the very “real world” scenarios that come up at every event.
I’m not sure we were so effective at the low-profile aspect of observing unnoticed since we were required to dress as we would if we were actually judging the event. While we assured all that we talked to that we had no official role at the event, it still must have been a bit intimidating for competitors to see a squad of judges sitting by the ring as they drove.

Marcie Quist lead the judge’s clinic while Keith Yutzy was the point man for the technical delegates. We all met at Shelly Temple’s farm on Thursday before the event for a special session on driving pairs. Each of us drove a test, while the others discussed the judging of the test. This was a great opportunity for those officials with limited experience with driving pairs. Friday we moved on to Lisa Singer’s Courage to Lead Farm for the combined test, followed by the CDE over the weekend.

One of the best things that the live event gave us was the opportunity to discuss, question and debate what was unfolding in front of us. As we sat ringside we focused on specific aspects of judging, rather than simply scoring a bunch of tests. For one group of drivers, we would focus only on the positive aspects of their drive, while another group we looked only at the qualities of the horse’s gaits.

It wasn’t just the drivers or horses that we looked at piece by piece, but our own judging and opinions. Rather than just calling a movement a “7”, we talked about why we thought the movement was a 7. We had to be able to articulate what we liked about the movement that made it better than a 5 or a 6, and what we would have needed to see to make it an 8 or 9.

This deconstruction of judging really allowed us to more fully understand everything that we were seeing. We could really take our observations apart piece by piece examining what lead us to the opinion we formed, then listen to what the others saw, and how they came to their opinion.

Much of our focus was devoted to communicating what we were seeing so that we could provide truly useful feedback in our comments while judging. It’s one thing to watch a dressage test scoring each movement and smugly commenting on what you don’t like. It’s another thing to watch a movement, then provide constructive feedback with just a few words that someone can use to improve their performance.

With that in mind, we watched a division focusing only on the words we’d use for feedback. We had to comment on every movement, but with only one or two words, and we could only re-use a word once on the test. Talk about stretching out those vocabulary muscles! 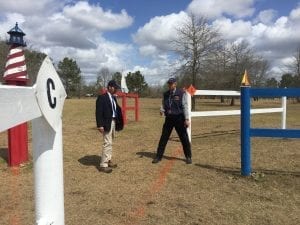 Of course being a combined driving judge involves more than just judging dressage. There are dozens of decisions made every day of the event from the briefing of volunteers to scheduling the order of go to keep the event running smoothly. We had full access to all of the behind the scenes action at the event.

The official judges (Francois Bergeron and Kail Palmer-Miller) and technical delegate (Debbie Bevan) for the event took time each day to talk with us to share their observations. They told us how they chose to handle various situations, and what lead them to make those decisions. We attended all of the briefings for drivers and volunteers paying attention to what was effective, and discussing what we may have added.

The event organizers were great. Hosting a back to back combined test and CDE is one hell of a lot of work. Can you imagine doing that with a dozen extra officials crawling around the event looking at every single aspect of the event?

These clinics are an obligation for licensed officials, but the weekend hardly felt like any sort of a chore. Instead, it felt more like, “Hey, let’s get together to watch this event.” We got to ask questions, share experiences and tell all the stories that come out of being officials at events like this one. I think everyone came away with more insight and experience to carry forward.

Cheers to everyone who made this possible!

Thanks for offering great online classes and feedback.