Repetition alone isn’t the key to learning. We’ve all stood somewhere near a ring with a riding instructor yelling “Head Up! Heels down!” over and over again until their voice goes hoarse. If yelling those two commands didn’t work the first 16 times, why would they work the following 30 times? Simply repeating the same instructions over and over again just doesn’t work.

So an instructor has to find different ways to introduce the same concept. This takes quite a bit of creative thinking. In some ways, it feels like wrapping a gift in a different box and wrapping paper and giving it to someone over and over again until you find just the right combination of packaging and paper that makes the gift “the perfect gift.”

From The Office of the Department of Redundancy and Reiteration Administration

As a horse trainer, I repeat myself… a lot. I’ve often joked that I could record a best-selling album with hits like:

The tracks, of course, would really just be me repeating the title phrase over and over again. Ahh, if it were only that easy!

Variations on a Theme

“…sort of like auto-cannibalism, only no condiments required, and less cleanup.”

In my lesson plans, articles, and classes there is both overlap and redundancy in the information I present. I used to be rather self-conscious about that. I was concern about being called out for auto-plagiarism (the act of plagiarizing one’s own work, sort of like auto-cannibalism, only no condiments required, and less cleanup.) 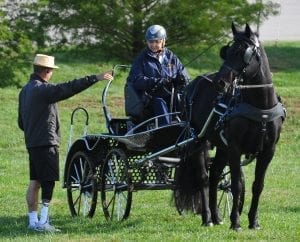 With time and experience, I realized, that this is actually just the reality of teaching. Teaching is a combination of two parts review, one part reiteration, and one part new information. Each day I’m returning to the same content over and over again, then, strategically placing the new information in where it will have the best chance of being put to use.

This understanding sets a little trap for me when I’m developing a new class. I’ll come upon a portion of the class that reviews a subject I’d previously covered in another class and think, “This will be easy, I’ll just go copy that section from the other class, and drop it into here.”

There’s a little voice on one shoulder that says “You can’t do that! Your students are paying for a new class. You have to present new information.” On the other shoulder comes a voice that says “You have to do that because that’s what the students need. They need that section to be review and revisited.” I listen to the second voice and copy the section over to the new class.

“I’ll have a genuine ‘WTF’ moment as I read the text I had written before.”

When it comes time to edit the copied section the trap is revealed. Yes, indeed, the copied information needs to be conveyed, but in the context of the new class, it must be done so in a very different way. I’ll actually get to places where I’ll have a genuine ‘WTF’ moment as I read the text I had written before. “Why in the world would I say THAT??” I’ve literally turned red with embarrassment as I hurriedly return to the presentation that I copied from to see if I had actually uttered the words that seem so out of place.

It’s like traveling to a restaurant you often go to, but this time from someone else’s house. When you arrive in town from the other side of the river, the whole town looks different. It’s a little disorienting at first because you’re not used to seeing it from the new angle. The location of the restaurant hasn’t changed, nor any of the town around it, but it looks completely different. The destination is the same, but the directions to get there are different.

When the Student is Ready…

One of the most interesting, fun, frustrating and gratifying experiences is when a student seems to all of the sudden grasps a concept or coordination. Their reaction is more often than not one of surprise. It’s not unusual that they will react with a comment like “Wow, that’s cool! How come you never told me that before?”

“I’d ask my parents and family to show me the letter “elemeno” because it sounded like a fascinating letter.”

Have you ever noticed that lots of kids can sing along with you at the beginning of the alphabet song, trailing off somewhere after H, but then jump in to belt out “W X, Y and Z!” for a rousing finish? They are constructing the alphabet from parts and pieces. I remember thinking “L, M, N, O” was one letter “elemeno”. I’d ask my parents and family to show me the letter “elemeno” because it sounded like a fascinating letter.

In a student or horse’s learning, there are things that make sense right away that seem to pick up with little to no effort at all. Other coordinations make sense but are just difficult to master. Then there are the ones that don’t make any sense whatsoever. These these more difficult to understand coordinations or concepts are automatically disregarded in their brain and go unnoticed.

Brains are great at auto-correcting for things that don’t make sense. If something doesn’t make sense, your brain will just delete without you even knowing it. You probably didn’t even notice the repetition of the word “these” in the last sentence of the previous paragraph because your brain auto-corrected the error.

The “auto-correct” feature in our brains makes learning a new concept difficult, or even impossible if the necessary preconditions have not been met. Once a student learns the preconditions to a concept, suddenly the new information seems to sprout and rise from the earth as obvious as a hundred-year-old oak tree!

… the teacher will appear. 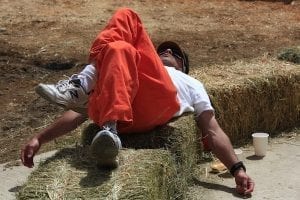 Of course, he may have vein pulsating from his forehead, coffee spilled down the front of his jacket, clumps of his own hair in his clenched fists… But there he is, where he’d been standing hour after hour, week after week, saying the same thing, in every possible way he could think to say it, and suddenly, it will make sense!

I recognize that pose of yours in the orange pants. I was at CanDrive last year and remember the bales of hay arranged in a circle outside the main barn. That was a tough week for all of us. I was leasing and driving a pair of Gerard’s Friesians then and met Stacey Giere who you remember was teaching as well. She ended up starting one of my Friesians to a cart for a few months this Fall at her farm in Ohio.

I am a Friesian breeder located in Jamesville, NY and currently have 3 mares and that one 5-year old gelding that Stacey started. I’m driving every minute I have in an effort to get him in condition to pull a heavier vehicle. I have questions about how to change from a cart to this 500 lbs.+ carriage. I ordered it from Poland through Newt of New Heritage Farm Carriages. It is a dream carriage that meets my physical limitations created from a past horse wreck. So,.. I have this one wonderful gelding that I’ve bred, raised myself and had Stacey start. I want to continue his training myself but to do it right I need some really good instruction. My goal is to pull this gorgeous carriage behind my sweet Nicodemus without fear of another major wreck. I want to drive him where ever I like but want to preserve the him, the carriage and me in the process!

I’ve driven ponies and Morgans since I was seven but never studied till I went to CanDrive. That was more of a trial by fire but it was a hoot none-the-less. Currently, I am immersing myself in your articles and have signed up for my second on-line session this Thursday April 27th. I would like to study with you in person so I’d like to discuss arranging for a small clinic with you at my facility. I want to offer it to my carriage association members as well.

I do have an very nice indoor arena that is 82′ x 165′; naturally lit as well as lighted for the evening or rainy days. I’m currently in the process of deciding on the final size and footing for the outdoor. I’d like your opinion on that subject before I make any final decisions. I do have serious space limitations because I am situated on the side of a steep hill. But I am still trying to at least match the size of the indoor. Is that size too small for you to teach and/or do the CAA evaluations? (82′ x 165′) My email is janbrose1@aol.com You have my other info in your system.

I’ve enjoy reading your teachings and your perspective. I am retired now but I taught physical skills at Syracuse University for 25 as an Associate Professor of Textiles; however I taught College students how to operate computer-interfaced textile machinery. You have a much tougher job since everything you are teaching has it’s own opinion! I look forward to learning more and more from you.

Hang in there and please don’t pull any more of your hair out; I’ll try extremely hard to not cause any more of that!

Hi Jan,
Thanks for the note! CanDrive was, as you say, a hoot! I’ll be heading back there this year, and plan to show up more physically fit that I was last year.

In terms of arena size, well, it’s always “the bigger the better” isn’t it? 82′ X 165′ is typical for indoor rings. I work with that size all the time.
Outside, if you can squeeze a little more, it’s a big help. (Sorry, I have to switch to talking in metric, because that’s how we set up arenas). A 30 X 60 meter arena drives very similar to a full-size arena. That’s just a little larger than the size of your indoor. I’ve just put a lesson plan up that describes how to scale dressage arenas in many different sizes. That would be a handy guide when deciding on arena sizes for your outdoor. You can see that lesson plan here –> Dressage Arena Setup

As far as the requirements for a clinic, it sounds like you are on the right track. The indoor is certainly useable for lesson and evaluations. Feel free to send me an e-mail or give me a call to discuss the details.