Snap shackles are fairly common these days in carriage driving. They making hitching and unhitching your horse quick and convenient, but the primary reason for using them has to do with safety.

Learn a little more about snap shackles, including the ones I use in this Facebook Live video I recorded on Feb. 7th, 2019.

Traditionally, carriage horses are hitched to the carriage with friction based trace attachments, or snap hooks, also known as cockeye snaps. This system of coupling works great for keeping a horse attached to the carriage in most circumstances. Occasionally a trace may release by accident, but that’s usually not a big problem, and it’s not the problem that we use snap shackles to address.

The trouble with friction based mounts or snap hooks arises if you end up in a tight spot with a horse because the carriage has gotten stuck, the horse has fallen, or the carriage has turned over. In those circumstances, the harness is usually twisted out of shape and under extreme tension. On top of that, the horse is usually having a bit of a melt-down. You need to get that horse detached from the carriage as quickly as possible.

With friction based hitching mounts or more traditional snaps, there must be slack in the traces to release the trace from the mount. That can be mighty difficult to achieve when the sh** hits the fan! 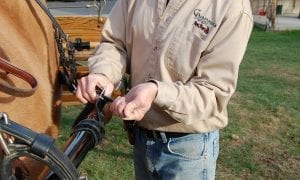 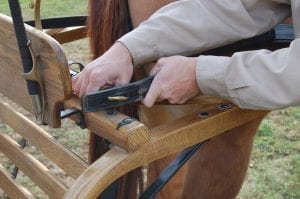 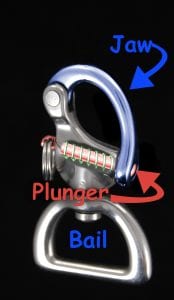 The parts of a snap shackle

A snap shackle has been engineered so that it can be opened while it is bearing weight. There are several designs of snap shackle in the world, but the ones we most commonly use in carriage driving are the jaw and plunger design. When jaw of the snap is closed, a spring loaded plunger pin holds the jaw firmly in place. When the plunger is drawn back, it slides out of it’s seat in the jaw, and the jaw rotates open freely.

A well manufactured snap shackle will allow the plunger to be extracted from the jaw with minimal effort regardless of how much weight is being held by the snap. That means that snack does not have to be created to release the traces or breeching for a horse who’s in dire circumstances.

Where Are They Used?

Typically, a snap shackle with a clevis pin bail is mounted to the carriage on the single tree. The harness traces should have a “D” ring on them to allow the snap to be easily attached and detached without resistance. If you have slotted traces, there are trace adapters that can create a D-ring attachment for your traces.

When driving pairs of horses or four-in-hands, snap shackles can be used on the pole head as well to hitch to the collars or breast collars of the horses on either side of the pole. 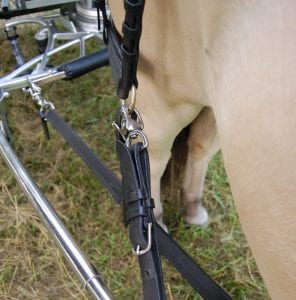 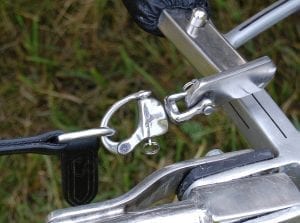 Snap shackle on a single tree 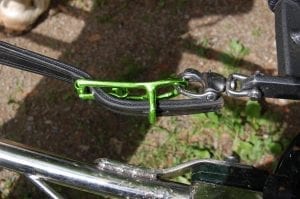 Are All Snap Shackles the Same?

Certainly not! Any product that can be manufactured can be copied and made cheaper. Cheap knock-off snap shackles can be hard to distinguish from their more expensive counterparts. While they may look, and seem to operate the same in daily use, there’s no way to know if they’ll operate the same when the chips are down.

Cheap knock-off snap shackles will often bind when bearing weight. In other words, in that one rare moment when you really really need to be able to open that snap, you can’t. I’ve experienced this, and I can tell you, it’s unpleasant.

Sticking with a brand name snap shackle means that you are using a piece of equipment that has been tested by the manufacturer to perform in it’s most critical function: releasing when activated by pulling on the plunger. In most cases, they have also undergone working, and break load testing.

There are a number of manufacturers of snap shackles such as Wichard, Herm. Sprenger, Harken, and Ronstan to name a few. No doubt, there are dozens of others as well. With a little research, you can find the testing and guaranty information for each brand of snap shackle.

It would be an interesting and fun project to figure out just how much force is exerted on a trace or breeching snap during aggressive carriage driving in something like a combined driving event. Of course, that would take some really clever rigging, and probably a ton of math. I haven’t seen that sort of study ever completed. If you know of one, please tell me about it in a comment below!

That said, most of the more reputable snap shackles report working load conditions in the area of 2,000lbs to as much as 5,000lbs (+900 kg to +2,200 kg.) The breaking loads are often listed as multiple times higher than the working load.

While I can imagine that a big horse running a carriage at full speed into a concrete post might get close to those weight limits, I think it would be rare. Suffice to say, if you choose a snap shackle that has been tested by a professional manufacturer, you’re rather unlikely to reach it’s breaking point. 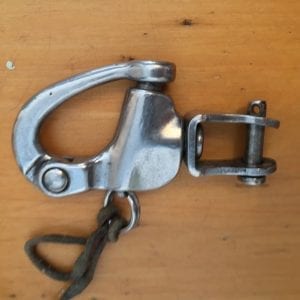 Occasionally a snap shackle will pop open by accident. This is relatively rare with a high quality snap shackle, and is usually the result of something other than a failure on the snap shackle’s behalf.

The most common reason that snap shackles pop open under use is that the plunger was not full seated in the jaw. More often than not, this is because the snap shackle hasn’t been cleaned… ever.

These pieces of hardware are in use in the dirtiest, grimiest, dustiest places on your carriage. When grime (especially horse dander) builds up on the plunger, is can’t slide smoothly through it’s housing and the hole in the snap’s jaw. When that plunger isn’t fully engaged in the jaw, it can release unexpectedly.

The solution is easy. Keep your gear clean! It just takes a little soap and water, and maybe an occasional spritz with some spray lubricant to keep those snaps operating freely.

The second most common reason for accidental release is a lanyard being pulled. That can happen when long lanyards with knots or loops are used on the plunger pull. They can be caught by passing over brush, a horse’s tail, or in the case of snaps on a pole, a mischievous pony grabbing the lanyard with his mouth!

I use nylon whip cracks (or poppers) for the lanyards on snap shackles. I burn the ends so there are no frayed bit to snag on things. These make great little, low profile snap pulls that rarely get caught up in anything.

Finally, damaged snap shackles won’t allow the plunger to full seat to keep the snap closed. While a good snap shackle is nearly indestructible while closed, they can get bent out of shape if they are left open. This sometimes happens to an open snap shackle while loading carriages into a truck or trailer. The open jaw can get wedge between two surfaces and torqued out of shape, especially if you’re using a winch to load the carriage.

Keep those snap shackles closed when they are not in use, and they’ll likely last you a lifetime. I have snap shackles that are over 20 years old that still work great.

Since so many people use cheap snap shackles that are not well maintained, it’s fairly common to see people taping snap shackles shut.

That practice effectively disables any safety benefit gained by using a snap shackle.

This would be similar to choosing to tuck your car seatbelt under your lap instead of bucking it into it’s anchor point. Sure, you won’t get trapped in your car by your seatbelt, but you may also be dead because you went through the windshield in an accident.

Taping a snap shackle closed takes the “quick” out of the “quick release” formula. At that point you might as well use a carabiner or other style snap that has been designed to not release easily. under normal circumstances, you won’t have a problem, but if you have to get a horse unhitched in an emergency, you may find yourself in hot water.

The Snap Shackles I Use 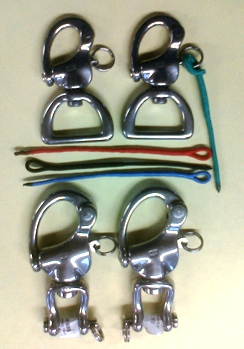 I’ve used Wichard snap shackles for about 20 years. I’ve found them to be among the most reliable snap shackle of all the snap shackles I’ve used. (Wichard doesn’t pay me to tell you that. This is just my experience.)

For the breeching holdbacks I use model # 2374

Since the main place in the world that snap shackles are use is in boating applications, snap shackles can be purchased from just about any well known boating hardware supplier.

Of course, many carriage equipment suppliers sell snap shackles as well. You may pay a few more bucks to buy them from a carriage supply retailer, but you’ll also be supporting those who support our chosen sport. So be a supporter and go to someone who’s in our hobby with us!

Here are a couple of links that I have no affiliation with, but I know have snap shackles:

www.carriagedrivingessentials.com (sells Wichard and others)

You’re welcome to tell them I sent you, and maybe they’ll buy me a beer sometime!

While I would far prefer that you help support out sport by purchasing your driving equipment from a carriage driving retailer, I also know that you’re likely to search these things out on Amazon. So I’ll share those links here. I do get a small referral if you purchase those items after following those links.

What do you use for your hitching safety?

What are your questions about hitching?