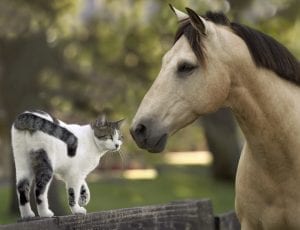 If you spend enough time around me, you’re going to find out about the eight-pound cat rule.  It’s an important rule to remember, and it will help you explain things to your horse much better, so pay attention.

I’ll start by telling you what brings the Eight Pound Cat rule to my mind today.  Right now I’m working on next week’s class “Teach Your Horse to Stand.”  I can’t tell you how many times I’ve heard people say “My horse doesn’t want to stand still.”

That phrase “My horse doesn’t want to” comes up over and over again when I’m teaching or talking to people about their horses.  Anything can fill in the blank, from standing to bending, or any other type of specific activity. This is when I bring up the eight-pound cat rule.

It goes something like this:  Have you ever tried to give an eight-pound cat a bath?  Even if you haven’t, you can imagine the scene.  There’s a human, outweighing the cat by at least 15 times, a tub of water, and a cat.

What follows is usually some howling, clawing, scratching, yelling and no small amount of swearing.  More often than not both parties are going end up soaking wet (maybe less so for the cat) scratched, bruised and grumpy A.F.

Now if you can’t get an eight-pound cat into a tub of water, what in the world makes you think that you’re going to get an 800-pound horse to do something that he doesn’t want to do?  Yet, you’re able to get your horse to go along with you do a lot of things that the horse would never think if he “wants” to do or not.

Think about it.  We see a beautiful horse and think “Wouldn’t it be cool to ride or drive that horse?”  We can picture the scene in all its majesty.  The beautiful horse, you on his back or in a fine carriage, floating along as one graceful presence on the landscape (insert inspirational music and sparkles here.)

So what do you think that horse thought when you walked by?  “Look at that human!  Wouldn’t it be cool if I could carry that human around the world?  Maybe we’d jump over things or trot in some certain specific way.  Better yet, I’ll bet I could pull them around in something with wheels on it! Maybe they’d even wear some really cool hat.”

Hmm, I don’t think so.  It was probably more like:  “I wonder if that human has treats?”

Very little of what we do as we enjoy our horses would occur to them as something they’d like to do.  Fortunately for us, they kind of like us.  They like being our friends or partners, and they like going along with the things we think to do with them. In most cases, they even enjoy it.

All of this serves as evidence, that the horse is indeed trying to do what we’re asking them to do.  If they weren’t we’d never get them as far as wearing a harness or a saddle, let alone hitch them to a wheeled inanimate object. So why do we come to this impasse so often when we think “He doesn’t want to…” fill in the blank?

What Do You Want?

More times than not, the horse simply has no idea what you want him to do.  He’s trying to understand what you want, but he just doesn’t get it.  There are a few things that could be standing in the way.  It could be lack of understanding, coordination, or just plain physical ability.

When I’m teaching a student, I have to have about three or four ways to explain a concept to that student.  Not everyone learns the same way.  Some people understand when I approach a subject from a sports analogy, while others have to see it from a scientific perspective.  I can’t get the same results out of every student by teaching the lesson the same way every time.

With horses, you have to be flexible with how you’re approaching work.  Sure, I use all of the same lesson plans that I write for you and post here.  But those lesson plans are cookie cutter, “Do A, and you’ll get B” machines.

Many of the things we’re asking the horse to do takes certain specific coordination.  It’s pretty hard to “show” the horse what that coordination is because we can’t really lead by example.  We’re also limited in the means of communications we have with them.  I’d love to be able to show a horse a video of what we want them to do!  Alas, we have to rely upon the few aids we have available to show them what we want.

Think of learning a new coordination yourself.  Try touching just your index and ring fingers to your thumb.  Not too difficult.  Now just your middle finger and pinky to your thumb.  A little more tricky.  Now alternate the pairs as quickly as you can.  That takes some thought, doesn’t it?

If that were some important exercise, you’d have to practice quite a bit before it came to you naturally.  Horse’s coordinations are no different. It takes time, and practice.  Some days they’re good at it, and other days they’re not.  Just like us.

Breaking down a new coordination into its parts and pieces is a good way to remedy the problem.  Go back to the skills that lead up to the new coordination you’re working on.  You may find that those skills weren’t as well established as you thought.  When you have success with the preliminary skills, then go back to the new skill, but don’t overdo it.  The tricky thing about coordination is you can have it right for a while, then it falls apart.  You don’t want to keep practicing something that’s not right.

Of course, there are times when the horse just physically do what we’re asking.  A great example of this would be stretching the frame for things like walk on a long rein, or lengthening in the walk or trot.  That skill requires flexibility, which has to be developed over time.

I couldn’t do a split right now no matter how you asked me to, or how well you instructed me on the technique.  If it were import enough to me, I could work on that flexibility a little bit each day.  Maybe one day, before I die, I could sit in a split.  The point is, it wouldn’t happen all at once.  If it did, the next stop would be the hospital!

When you’re working on a skill that takes a new degree of strength or flexibility, you have to keep this in mind (not me in the hospital stuck in a split, the paragraph before.)  If you reach a place in the exercise where the horse just won’t go along with you, it may be because he just can’t go along with you.

As you can see, the remedy all of these issues is fairly similar.  Take a step back to examine what you’re doing.  Work on a more fundamental version of what you’re asking for, even if that means changing your approach.  Then move forward when you’re back on the right track.

The Elephant in the Room

Ughh, I can’t ignore the elephant in the room!

Okay, I’ll admit it: There are circumstances in which the horse really genuinely doesn’t want to do something.  Usually, we find this when there is a fear about what you’re asking him to do.  For example, you’re trying to get the horse over a scary bridge.  Who can blame him?  There are quite obviously bridge trolls under there, and your horse’s loud footsteps will sure wake them up.

In that case, you’re going to have to get your patient pants on.  Your horse mostly trusts you, but bridge trolls?  Eff those guys!  They’re scary!  You’re going to have to be the patient, understanding, but still a firm leader in that situation.  This is a subject for a whole other article… Oh, wait!  I already wrote that article.  It’s called “Driving Past the Spook.”  You can get by following the link, or you can have it for free just by signing up for my newsletter.  That’s cool!

Wow, all of this just from an eight-pound cat!  The upshot is, if you feel like your horse is telling you he “doesn’t want” to do something, it’s time to reassess what you’re doing.  Take a step back, then try, try again.  After all, there’s more than one way to bathe a cat.

Smartly eloquent, in laymens’ terms, with a touch of humor; making the concepts easy to grasp!

That was a very relatable article and a very good read. Thank you!