As equestrians progress in their skills, the need to master the fundamental skills do not fall behind them. In fact, as the difficulty of their skills increases, so too, does the importance of the basic building blocks of training. While you may be working on changes in expectations at a higher level, the value of the fundamentals remains the same.
☰ Menu

The more they stay the same!

I was asked an interesting question this morning about my upcoming class on driving cones.

“Will the content be applicable to both lower and upper levels?”

The answer is an emphatic “Yes!” The strategies for driving cones don’t change from one level to the next.  Sure, the times and clearances change, but the skillset is the same.  You still have to plan a good route that’s appropriate for you and your horse.  You have to focus your attention on where you do want to go, and not where you don’t.  Once on course, you need to be able to have reliable speed changes that allow you to handle the technical parts of the course while making up time on the wider sections of the course.

Training for all of these skills at home is no different.  Any of the exercises that I use for teaching people how to drive cones can be used for brand new drivers right through advanced level competitors.  The difference between the advanced level driver and the newbie is the point of focus. 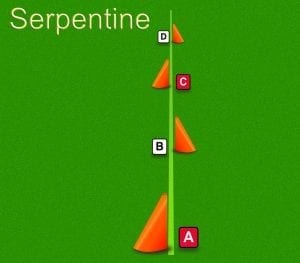 The best example of this is the difference between a serpentine and a zig-zag on a cones course.  A serpentine is comprised of 4 cones set in a straight line.  Each cone is marked sequentially A, B, C, D, alternating colors red and white.  The letter indicates which side of each cone you have to pass.  If the first cone in the line is lettered in red, you pass with that cone to your right.  The next cone would be lettered in white indicating you should with that cone on your left. 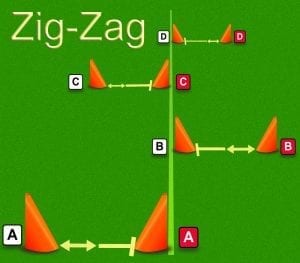 A zig-zag is comprised of 4 pairs of cones, alternating on either side of a straight line.  The pairs are marked A, B, C, D indicating that the cones must be driven sequentially.

Successfully driving either of these figures require similar strategies.  The serpentine is a bit easier to drive since it only involves 4 individual cones.  When drivers first encounter this obstacle, they tend to take wide loopy turns from one cone to the next.  That gets the job done, but it eats up a lot of time on the clock and requires your horse to make larger changes in direction.

As the driver learns to drive the figure more successfully, they make smaller loops, maintaining close proximity to the line the cones are set upon.  At that point, adding in the extra cones that comprise the zig-zag doesn’t change the driving much at all.

Does that mean that the upper-level driver should skip the serpentine as an exercise?  Not at all.  Since the serpentine requires less accuracy than the zig-zag, you can use the exercise to focus on skills other than accuracy.

If you watch the video that I posted on Driving a Serpentine, you can hear me coaching my student on where she’s using her eyes on the figure.  Following the same skills we worked on with the Zen Circles, I had her looking at the third cone in the lineup as she was approaching the first cone.  Additionally, I begin to ask her to focus on the outside rein through the exercise.  That skill building can then be applied to the zig-zag to improve her driving on that figure. Of course, those skills are handy on other parts of a cones course, in hazards, and even in dressage as well.

All of this got me thinking about how skills at the lower levels are applied forward to the next level of driving.  In my reply to this morning’s question I mistakenly wrote:

“It’s not analogous to dressage where the intermediate level drivers are employing a different skillset than the training level drivers.”

That wasn’t an entirely accurate statement.  Sure, driving an intermediate or advanced level dressage test requires additional skills.  That doesn’t mean that it does not require the skills that were developed at the training level.  Upper-level drivers aren’t applying different skill sets.  They are applying additional skills sets.

All too often people overlook this important detail.  It’s easy to fall into the trap of thinking that once you’ve ascended from the lower levels that you no longer need to use the skills that you used at the lower levels.  Nothing could be further from the truth!

When a student asks for my help on an upper-level skill, I’ll start by assessing their ability at the skill in question by having them work at without input from me.  Occasionally we just go from there, building and refining the skill.  More often than not, I see something lacking that can’t be addressed while working on the elevated skill level.

This leads to visiting the more fundamental skills that should have been solidly in place before working on the upper-level skill.  This isn’t about “sending them back”, it’s more about reviewing and shoring up the fundamental skills.  A good friend and trainer in my past put it best:  During one of our lessons she said:

“You’re not telling me anything I don’t know, you’re reminding me of what I do know, and why it’s important.”

This is a great way of saying upper-level drivers need to remember to apply their training level skills even as they work on their more advanced skills.

If you’re an upper-level driver, revisiting the fundamental skills that got you there is never misspent time.  Those are the skills that feed all of your other skills.  If you feel like you’re stuck in trying to build a new skill set, the easiest way to get unstuck is to look at the skills that support the new skill.  Sometimes all you need to do in polish up those foundational elements, and the new skills fall into place!