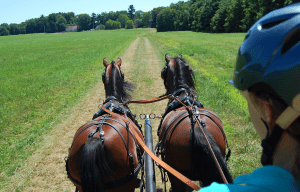 Carriage driving pairs of horses and ponies is great fun, but it comes with one common challenge. Getting the two horses to work equally as a pair. The solution is relatively simple, yet most people go about it all wrong.

I’ll paraphrase the question that I get on this subject all the time:

“I have a pair of horses that I really like. However, one of them is always slacking in the traces. No matter what I try, I can’t get him to do his fair share. What can I do to make him do his work?”

The question assumes that the problem is with the horse that isn’t pulling his fair share of the load. Even when that is the case, simply getting after the pokey pony isn’t going to make things any better. 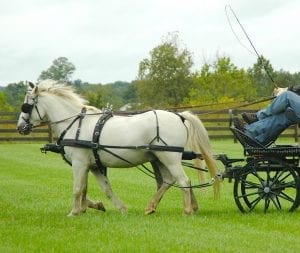 With the willing pair, there’s the “keen” horse, who’s always right up there in the traces, and then there’s the other horse who always seems to just go along for the ride. It’s tempting to call the second horse a “slacker,” since that’s the literal definition of the term, but it’s not quite that cut and dry.

All too often the assumption is that the problem lies with the slack horse. Certainly there times when this is the case, but not nearly as often as you might think. In fact, I might be willing to go so far as to say that the majority of the time the problem is with the keen horse.

There can be any number of reasons for this, not the least of which is that the keen horse may simply be an overachiever. Like that one annoying person in the office who’s always first in, last out, and over doing it on any task, the overachieving horse simply does not want to be outdone.

There can be other issues though. The keen horse may feel obliged to pull full weight of the carriage. This is especially common when the horses are hitched to a carriage that is also used as their single vehicle.

Let’s say that’s a 550lb carriage that either horse pulls with relative ease as a single. When they are put to the carriage as a pair, they are each (in theory) only obliged to pull half of that load. To a keen worker, this feels wrong. So he’ll move into the collar to pull the weight that he’s used to feeling in the collar.

The slack horse on the other hand is a little more mellow in nature. Sure he may be a good worker on his own, but if this other guy is going to keep taking all the weight, why bother arguing?

Even when the slack horse truly is lazy, and unwilling to do the work, the solution still starts with the keen horse. You need to get that keen horse to give his partner the chance to work. This may sound a little counterintuitive at first, but let’s look at the problem from a different prospective to help you make sense of this.

Let’s say that you just bought a couch, and need some help getting it home and into your living room. You call your brother in law, who’s a big guy that works out regularly. You figure he’ll be the perfect help. He’s not quite big enough to move the couch singlehandedly, so you two will team up to get the couch from the truck into the house. 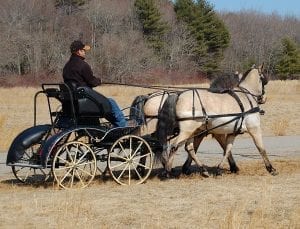 The right pony is outpacing the left pony.

Since that couch is such easy work for him (especially with two of you), he grabs ahold of his end and starts marching toward the front door. Of course, you try to keep up as best you can but eventually you’re going trip and possibly drop your end.

Now your in-law starts to get impatient, and demands you get your end up again right away. As soon as you do, it’s off to the races again, this time bashing the furniture on the door as you enter the house.

I don’t need to get your blood pressure up by carrying on with this story. The point is, if you never have the chance to keep up with your end of the load, it’s difficult to work as a team on the project.

In the case of the willing pair, if the keen horse never gives the “slacker” a chance to work, there isn’t much that the “slacker” can do about it.

Every Team Needs A Good Leader

The key to this formula is contact through the reins. At minimum, you have to start off with contact to the keen horse through the reins before you ask the pair to move off. If you can, ask the slack horse to step up to the contact as well. 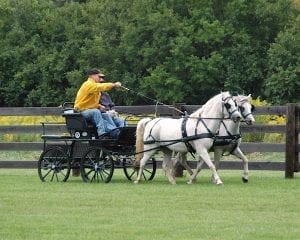 Half halting while encouraging the slack pony.

When it’s time to move off, the slack horse will need a little encouragement. As you are ask your horses to move forward as a pair, give the slack horse a light touch with the whip.

In that same moment, half halt on both reins. That half halt is going primarily act upon the keen horse since he’s the one that’s ahead of the game. This will give him a pause, giving the slack horse a chance to step up into the traces.

Once both horses are moving into the traces, it doesn’t mean you get to slack off as the leader of this team. You’re going to have to give consistent half halts to remind the keen horse to be patient. This will give the slack horse the chance to keep up to the work.

If your horses have been going along as “the willing pair” for some time, the slow horse will need encouragement. He has no reason to believe that the keen horse is going to let him share the load.

On the upside, as the slow horse starts to realize that his partner is waiting to share the load, he’ll catch on to the fact that they are indeed supposed to be working as a pair. He’ll start to develop the expectation that when they’re both hitched to the carriage together, he’s supposed to work as well.

This isn’t going all happen in one drive. It’s going to take a fair bit of consistent work building one successful drive on the next to change your pair’s working relationship. Keep patiently working your halt to walk, and walk to trot transitions using this formula. Over time your horses will become more and more matched as a pair.

But My Ponies Aren’t That Easy

I realize that this solution seems like a rather simplified answer to a complex problem. Certainly there are many cases that there a myriad of of troubles at work. However, even in the worst case of “the willing pair,” this is the first step in solving the problem.

Give this coaching a try to begin with, and let me know how you make out in the comment section below.

Thanks for this great write-up. It all makes sense. Will you have an online driving class in the future?? I am sure there will be alot of interest. Myself as one!

Andy
I have used this on my pair with great results. I kept knitting on my poor slow pony for some time and not getting results. Now I realize as he
Probably did a long time ago that this was not working because keener would never let him win. I believe in training that when you can set it up for them to make the right decision they are learning as opposed to mechanically forcing the issue.

Perhaps the keen horse also needs the reins dropped a slot on the bar to convince him/her to chill a bit with each half halt. Sometimes I have found placing a milder bit on the “Slacker” encourages them to step up a bit. Other things to consider are the pecking order.

Andy, I really enjoyed your insight here, as it is something that many pair drivers struggle with. They may appear matched, but mentally they are not, and we as good drivers need to be able to overcome this

Thank you for sharing your idea. I have to try this!

very good info… as I am thinking of a pair.

MY keen pony processes voice commands in a split second pony and my slacker counts one- Mississippi before he reacts! I’ll give this a try! Thanks Andy

Thank you so much for this article Andy!
I’ve got a new pair that does exactly this and would like to correct it before it becomes a habit.
Love your articles!

Crossing the traces worked for my full sisters pair. Working them that way shifted part of the load to the slacker and she improved. Keen sister got tired of not being able to keep her nose if front. However, keen one and slacker reverted to former arrangement if not driven that way regularly… Slacker seemed to enjoy the her position…