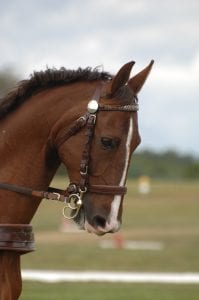 My goofy Saddlebred at Laurels CDE

Maintaining perspective while training horses for carriage driving can be a challenge. This is especially true when you’re trying to improve your dressage scores in combined driving. We have ideals in our minds that we’d like our horses to live up to, and when someone misses the mark, it’s tempting to say “poo-poo on you.”

I nearly fell into that trap while doing some casual web-surfing this morning. I happened into a photo album from a combined driving competition. I’m not going to lie, my first reaction was to recoil. My horse trainer eye immediately went to all of the things that I would like to see different in the horse.

It’s not a voluntary thing really. When you watch horse’s movement for a living as a carriage driving instructor, you can’t help but see the things you don’t like. If you’re not careful, that impulse can quickly turn to disdainful criticism.

Of course, I’m a curious person, so I clicked around a bit more, and fell onto the blog that accompanies the website. The title that caught my attention quickly was the post “Don’t be the person who can’t see the forest for the trees”

It’s a quick little read about how proud she is of the horse that she’s owned for a long time, but has introduced to a new career in combined driving. The quote that popped out at me was: “He did his entire dressage test without his chin touching his chest! That is progress!”

Of course I laughed, but I was definitely laughing with her. Those who haven’t had the distinct pleasure of driving a wormy, serpent-like saddlebred who was trained to go in a completely different manner than what we’re looking for in dressage will never know the joy of finally having your horse take his chin off of his chest.

From Whence We Came 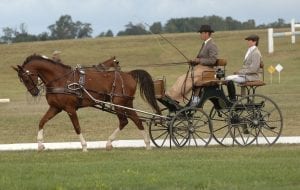 RH in one of his favorite positions, reaching for his breast collar rather than forward.

My last horse was a saddlebred who came from a background of “drive and hold.” The Saddlebred world puts a premium on a rather “different” way of going than what we look for in dressage. The first challenge was to change his relationship with contact on the bit.

On top of that, I remain convinced that most saddlebreds have been granted about 7 more vertebrae between their wither and poll than most other horses have. They have an ability to move their necks telescopic fashion. They are also masters of talking you into following them down a rabbit hole of shortening the reins and going faster.

RH had a way of convincing me that he needed to be held firm, and he’d be even better if I would just let him shorten his neck just a little bit more. Just when I’d think he couldn’t collapse his frame any more, he’d find a way to manipulate the space/time continuum and shorten another six inches.

In the other direction, Saddlebreds can lengthen their necks long enough to cross an ocean just to get to the grass on the other side. Once you’ve convinced one of these horses to “follow the bit” (something that takes a lot of convincing) you find out how long that neck really is.

With RH I adopted a strategy of using a rein clamp set to the length of rein that worked best for his conformation.  When all was right and well with the world, that rein clamp would be just below my left hand by about two inches.

Throughout the drive, as things got fast and heavy, I’d find myself unconsciously and involuntarily shortening the reins. Eventually I’d feel the rein clamp bump against my shin. That was my cue that I’d fallen down the rabbit hole again, and I needed to talk him back out to a longer, quieter way of going. 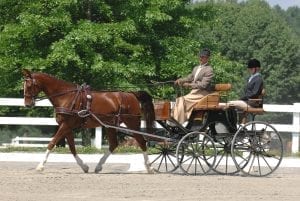 Occasionally RH could be convinced that there was a better way.

It’s About the Journey

This is all a long way of saying to the author of the post, “I’ve been there.” I appreciate her reminder, that at first glance, you might see a hot mess. However, that hot mess may represent a significant improvement from the scalding chaos that it once was.

You’re the only one who really knows the roads you’ve traveled with your horse. With that in mind, it’s really your perspective that counts more than the judge’s score or comments made on the sidelines.

I thought your lovely horse looked like a Saddlebred! I, too, have one of these loving, patient horses. She was trained in Saddle Seat, then I started riding her dressage with lessons from a wonderful Pony Club graduate. It took two years to get her to lower her head, but once she did, her nervousness disappeared and she learned quickly. After a car accident and other injuries, we made a career change to driving and she loves it, as do I.

A great reminder each horse is unique with their own strengths and weaknesses. My Morgan is always ‘at work’ when in harness. He has a power walk which is great most of the time except in dressage. I’m ok with that. I prefer a forward horse to a sluggish one.

“He has a power walk which is great most of the time except in dressage.”
So many people would love just a little bit of that power walk in their dressage!
I too prefer the more forward horses (within a reasonable limit.) For some reason it’s a little less frustrating to handle a horse who has a little too much energy, than one who won’t go. Sometimes getting the pokey ones to go feels like pushing wet rope.
Either case, I really love the “Developing the Walk” lesson plan. For the zoomy horses, I can drive that lesson plan with the emphasis on the slowing and stretching down. For the sluggish horses, I focus on the working walk sections, using the energy from the trot portions of the lesson plan.