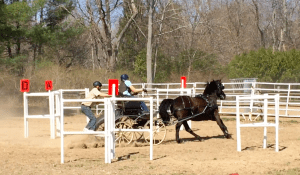 I gotta say, I had a really good time this past weekend.  Well, that shouldn’t be that much of a surprise, since I was surrounded by some of my favorite people and ponies.  But I went into the weekend a little tentative.

I’ve had this thought of hosting a driving camp for quite a while, but have never really put it into action.   I wanted it to be more than just a  series of back to back lessons.  One-on-one lessons are fine.  We get a lot done, and everyone gets individual attention, but I wanted something more than that.  I wanted something that would get everyone on the same page, working with similar goals in mind.  So I came up with the “Spring Tuneup Camp” idea.

Since this was just a little hatchling of a plan in my head, I figured I’d give it a try with my regular students.  After all, we all know each other pretty well, and frankly, if it sucked, they’d tell me.  I hosted the camp at Kathy & Joe Devine’s farm where I teach at every week in East Bridgewater, MA.

I planned out 4 days of driving with each day split into a morning session and afternoon session.  Each session would be devoted to a different topic.  The sessions would all start with an unmounted discussion of the subject we’d be focused on.  I figured that would give us the chance to really get down to the nuts and bolts of the subject.  It also gave everyone the chance to ask questions, get clarification, and relate their experiences.

The other cool part of the idea was to schedule things such that each session would dove-tail the next.  In other words, the skills that were built in the first session would have particular relevance to the second session, then those sessions would relate to the third.  It was kind of the real world version of cumulative learning.

I’ll have to admit, I wasn’t sure how well received this whole plan was going to be.  After all, I’ve been doing “lesson days” with most of these drivers for years.  I wasn’t quite sure how everyone would react to such a significant shift in the way we’d work together.  I didn’t know if the beginners in the group were going to feel like they were in over their head, while the more experienced drivers felt like I was covering the same stuff they’d heard from me for years.

Well, I’m happy to report, it was a huge success!  My students were more than “willing to go along” with my plan, they were enthusiastic about the plan.

The first day was a half day devoted to transitions.  We worked with the “Training Dial“, focusing on the main components of creating a good transition (preparation, execution, and follow-through.)  We also worked a little with getting straightness, since if you’re not straight, it’s going to be hard to put a  good transition together.

Day two started with impulsion, and exploring all of the things that really make up that one loaded word (it means a whole lot more than you think!) Then we took the energy developed in the impulsion lessons, combined it with the preparation and follow-through of the transitions work to create lengthenings in the walk and the trot.

On Saturday morning we focused all of that work into dressage.  We looked at one test, and everything that goes into the test including the scoring of the test.  It’s one thing think you know a test, but it’s another to be able to watch a test and score it as it’s happening.  So I decided to have everyone act as judges when they weren’t driving, scoring the other driver’s tests as they went.  Even the auditors got to score!

That exercise really helps people gain a new perspective of dressage.  Not only do you realize that it’s tough to evaluate one movement after another, but you get a better idea of what judges see when you’re driving.  I had the drivers using the “dressage-do-over” format.  Each driver got to drive the test twice, with coaching and exercises in between the tests.

In the afternoon we focused the transition and impulsion training on my favorite cones lesson plan, “The Field Goal.”  Despite the fact that almost no one understood why I call it “The Field Goal”, everyone had fun with it.  It’s a great exercise for building the skills for regulating your pony’s pace from big, ground covering trots for the open areas of a cones course, to precisely collected movements for the technical turns.

By the end of the day Saturday we were all pretty punchy from three days of non-stop focused work.  It was perfect timing for “Beer, Wine, and Whips.”  With an activity named like that, what could possibly go wrong?  We set up a game of “Whip-can” in which players score (or lose) points for knocking cans (in this case bottles) off a table with their whip.  We tweaked the rules and came up with some pretty good adaptations to make the game more fun.  Keep your eyes on my website for published rules sometime this year!

Sunday it was time to let our hair down a little and go fast!  The morning was all about driving hazards.  Our hosts put together some great portable hazard elements, complete with letters, and a great place to practice.  We talked about hazard walking and driving strategies, then put the ideas to use.  There were some pretty impressive runs through that hazard!

In the afternoon we brought the lessons back into the ring for driving a cones course.  The course involved some challenges that gave everyone the chance to put the week’s training into use.

If you’re still reading this, you’re probably thinking “Wow, that was a lot!”  It was a lot, but it was a lot of fun too!  I can’t speak for everyone, but I think this was just the kick-start to the season we needed.

I’m really grateful to have such an awesome group of students who are willing to follow me down paths that none of us are quite sure will lead.  They are on the front line of my “testing and development.”  Without them, I wouldn’t have nearly so much great stuff to share with everyone else.  It’s inadequate to say that “I learn as much from them, as they learn from me.”  but I can’t find another way to say it.  They have taught me how to teach, listen, communicate and much more.

I’m especially grateful for our hosts, Kathy & Joe Devine, for their efforts giving as a great place to drive.  They shuffled horses and ponies around to make room for us, created a whole new hazard, and even hosted some of the students as guests (everyone should be so lucky to have them as hosts by the way!)

So, thanks to all who took part over the weekend!  I’ll certainly be taking the lessons learned this weekend to develop similar weekends to come.

Sure thing Carolyn! Just so you know, there’s a signup page for my newsletter: http://www.CoachmansDelight.com/newsletter/
I’ll go ahead and fill it in for you. You’ll get a confirmation e-mail shortly!