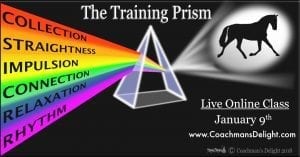 I’ve been surprised at how many horse enthusiasts aren’t aware of the training scale. Of the ones who are, many view it as an overly complicated, strict set of ideals that can’t possibly be reached, held up by FSDQ’s (Fun-Sucking Dressage Queens.)

I don’t have anything against dressage, or dressage queens. Just people who latch on to something as “the only way” that something can be achieved. Those are the fun-suckers that I’m thinking of, and they’re the reason that a class on the training scale sounds so unappealing to many.

I’ll admit that as I embarked on a life of training horses, I was aware of the concept of the training scale, but didn’t have much use for it. It seemed an awful lot like book-work, and half the reason I was out playing with ponies was to avoid just that sort of thing.

I wasn’t going to be held to someone else’s ideals. I was going to figure it out in my own unconventional way, unrestricted by their rules. 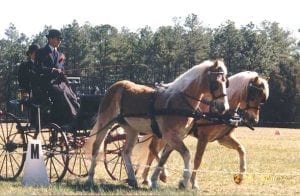 That worked for me for a while. I made some pretty good progress figuring things out on my own. Sure, I got some bumps and bruises on the way, like the first time I got dumped out of a carriage and had to walk 2 miles home.

When a trainer explained to me that it was because I didn’t use the rein that was closest to the thing I was trying avoid, my brain fell out of it’s case. I was trying to avoid a stump on the right side of the trail, and he told me I hit it because I was only using the left rein to avoid it. I couldn’t understand how using the right rein (the outside rein) could have possibly made a difference (connection/straightness.)

I managed to survive my own ignorance for a long time, but the training scale had a habit of resurfacing. I’d finally get a hot horse to settle down, then get comments on a test like “Would have been nice if you had put a little heart into it.” (rhythm/impulsion)

It would come up when I was “stuck” with a horse’s training. I’d try everything I knew but “the horse just wouldn’t get it.” Someone would mention that I was trying to skip a step in the scale, which of course, annoyed the hell out of me. But then I’d go and visit that step, and things would fall into place.

Experience is the thing you get when you’re expecting something else.

I was getting myself a lot of experience, but I was working much harder at it than I had to. 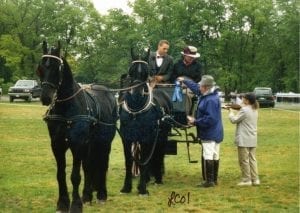 Still, I had my doubts. I still saw the scale as something complicated that I had a hard time remembering, let alone following. But when I got stuck, I’d revisit the scale.

The more I started returning to the training scale for guidance, the less complicated it seemed. It didn’t just seem less complicated, it seemed to be simplifying the project of training horses. Rather than playing a guessing game at what I should be focused on, it was like having the answer key in hand while taking a test.

That’s what the training scale is to me now. The training scale doesn’t serve as ruler, it serves as a training and trouble-shooting guide. And it can be used in the real world, with real horses, ponies, and people.

What’s In It For You?

So what those of you who decide to take the class will get is a more useful version of the training prism (my personal update.) You’ll get a clearer understanding of how one type of work supports and enhances the next. You might even have one or two of those really cool “Ah ha!” moments when you see this explained in terms of real horses rather than an elitist set of ideals.

Or, you could go straight to the class on Runaways, because, you know, what could any of this have to do with a horse that bolts anyway? (rhythm/relaxation/connection)

I like your comments in the above article, especially “experience is the thing you get when you’re expecting something else.” Sometimes it’s an “oh wow” moment or unfortunately it could be an “oh, oh” moment. When I exercise my horses I always have a lesson plan in mind and when things aren’t working out as well as I would like I always look back to previous lesson plans you have presented and find one that just might help. I have a loose leaf notebook full of your lesson plans and enjoy using them. Thanks, Andy for all your help and suggestions. Rita