When you’re teaching a horse to drive, sometimes everything goes great until it doesn’t. Things may go great in the preliminary work, but then you hit an impasse.

Those problems can be mild, as described below. However, if the problems go unchecked, or ignored, they may be a prelude to a runaway.

This question was posted to Coachman’s Delight Facebook page. Fortunately the poster has enough wisdom to pause and look for help when she needs it.

Ok, I have a question, perhaps someone can help me with training ideas/methods. Perhaps there is an article or video that addresses this subject, I’m all ears. I have an older horse who is green broke to drive. We were working in a 2 wheel road cart. Graduated to a 4 wheel. We did great in the road cart, but now that we are in a 4 wheel, I’m having a little trouble knowing what to do. What do you do when a horse jackknifes the carriage? At times, when asked to go forward, she steps over to the side and wants to choose her own direction. When I’m on the ground, the horse is very good at stepping over from the whip, one step at a time. When I’m in the driver’s seat, I can’t get the horse to move over. She seems to be focused on something else and the whip doesn’t mean a thing. What lessons do I need to practice to correct this?

This question poses as many questions as it does answers, but I’ll give it a go.

At times, when asked to go forward, she steps over to the side and wants to choose her own direction.

This can be considered a form of baulking. Not all balking is a refusal to move like a mule who plants his feet. Baulking is simply an evasion to moving in the direction the driver has indicated.

This is something that I’ve covered in “Driving Past the Spook.” It doesn’t sound like your girl is necessarily spooking, but handing it is the same regardless of if it’s a spooky situation, or just a garden variety evasion.

I may be bias (mostly because this is how I’m trying to make living 🙃), but I think that all new drivers or drivers with new to driving should take this class. It’s better to know how to handle these situations before they arise!

Enroll in the class: Driving Past the Spook

Don’t want a whole class on the subject?

Read: Article: Driving Past the Spook (This article is included in the class.)

In any case, you’re going to have to figure out what’s causing the evasion. Since this appears to have come up after an equipment change, that’s the first place we’ll look.

Did the horse exhibit this behavior in the two-wheel carriage?

It’s possible this has been happening all along, but to a lesser degree. You may not have noticed it in the two wheel carriage because a slightly crooked transition in the two-wheeler didn’t concern you. Since you weren’t concern, you didn’t react, and the situation sort of self corrected.

In the 4-wheel carriage, it may be more noticeable, and raise more concern. Concern can equal tension, and tension can equal blocking in the reins. The horse reacts to the blocking by stepping to the side, since you are asking him to move, but allowing him enough rein to freely move forward.

How heavy is the carriage in comparison to the 2-wheeler the horse was started in?

When a horse perceives they are being asked to pull a heavy load, sometimes the take a step to the side to get the load moving. This doesn’t necessarily mean that the carriage is too heavy for the horse. It may just mean he *thinks* it’s too heavy.

That’s common with horses who’ve learned to drive with very light carts such as Houghton show carts, often seen in breed specific show rings. It can also come up with horses who are learning to drive later in life. They simply never have been asked to pull anything with substance, so it just feels wrong to them.

Soft footing such as sand found in arenas or deep grass create much more resistance, making the problem worse. You can make the work a little easier by using the carriage on hard footing such as pavement, or hard packed dirt.

This is actually quite common when driving sleighs. When the sleigh is in motion, the runners are actually melting a tiny little micro-layer of the snow they ride over. That’s what makes them glide so freely.

When you stop for an extended period of time, that tiny layer of melt returns to ice, and can freeze the runners to the surface. Experienced sleigh horses eventually realize that it’s easier to break the bond with a little step to the side rather than just pulling harder forward.

Do both front wheels of the 4-wheeler turn freely?

Check by putting the front axle on a block, then give them a spin. They should continue to turn until they run out of energy, rather than slowing then stopping abruptly.

Is the 5th wheel turning freely with a person sitting on the carriage?

Holding the shafts, there shouldn’t be resistance to turning the carriage left or right. If there is, there is, the 5th wheel needs some attention. It may as simple as adding some grease, or may need more attention than that.

Once you’ve done all of your homework on the equipment issues, it’s time to look at your connection through the reins.

Many people mistakenly equate “lightness in the reins” as a good thing. “Fluffy Pants is so good that he turns from the lightest touch of the rein when I’m driving him.”

In carriage driving, there’s a limit to that. If the reins hang in long bows like garland in a Christmas tree, there is almost no connection through the reins. Yes, the horse may still be doing what he’s asked, but primarily off of voice commands, and what he feels the reins or whip doing on his body as much as the bit.

That gets the job done, but there is little to no opportunity for complex communication. Only very broad communications can be sent down the reins, and there is significant lag time between when you send a message down the rein, and when the horse receives it.

It’s also causes great confusion for the horse when real work begins. The driver can unwittingly block the horse with the reins with the slightest touch. That’s really common in forward transitions, as the driver’s hand remains stationary while asking the horse to go forward.

If the contact is very light, work with some more ground driving exercises. Focus on getting the horse to draw the bit forward enough to take the slack out of the reins between your hand and the harness. That will be more contact than you’d use riding.

“When I’m on the ground, the horse is very good at stepping over from the whip, one step at a time. When I’m in the driver’s seat, I can’t get the horse to move over. She seems to be focused on something else and the whip doesn’t mean a thing. What lessons do I need to practice to correct this?”

First of all, good for you for teaching your horse to move off the whip!

Right now your horse is focused on whatever the issue is that he causing the baulking. That stimulation is overriding all other stimulations she is receiving. She just doesn’t have the bandwidth to listen to the whip commands while she’s trying sort everything else out.

Once you’ve worked through whatever is causing the baulking, you’ll be in a better position to translate your ground exercises with the whip to the carriage.

Well that’s a whole lot of stuff to come out of just one question!

I imagine there are answers to my questions that you can give right away. Of course, there are other answers that you’ll have to do some work with your horse and equipment to find.

Of course, if you are not the original poster of the question, you can share your thoughts, experiences, or questions here as well. We all learn more when we learn together! 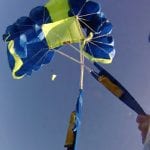 Are You Prepared for a Runaway? - It was my last chance for survival… I had just left an airplane at about 6,000 feet (1,800+ meters), and I was spinning on my back being slung around like a doll by a malfunctioning parachute rapidly diving toward the ground. There was no way I could possibly survive hitting the ground at that speed.… Continue Reading 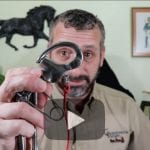 Carriage Driving Snap Shackles - Snap shackles are fairly common these days in carriage driving. They making hitching and unhitching your horse quick and convenient, but the primary reason for using them has to do with safety. Learn a little more about snap shackles, including the ones I use in this Facebook Live video I recorded on Feb. 7th, 2019.… Continue Reading 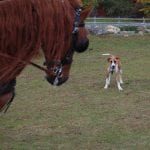 The Last Straw - It’s seldom “just one thing” that causes a problem for your horse. I was inspired to write this little note by a post I ran across called “Trigger Stacking.” It’s a great quick read about how one thing going wrong usually won’t cause a problem, but when it’s combined with several other factors, things can… Continue Reading

What’s the Bucking Point? - When a horse or pony bucks in a carriage, it presents a potentially dangerous situation. If the horse is able to get his hind end high enough, he can kick the carriage, or worse yet, the people in the carriage. To safeguard against that, a bucking strap can be added to the harness. However, that… Continue Reading 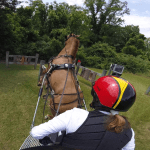 When Your Carriage Horse Spooks - Even the best horses have their spooky moments. When those moments occur under saddle, their usually pretty easy to ride through. However when we put the horse to a carriage, those spooks can a be more intimidating. As with many things in life, it’s not about what you’ve been handed, it’s what you do with… Continue Reading

View cart “Zen Circles” has been added to your cart.